In the post-war era, the wheels began to turn again in Sweden. Industrivärden increased its holdings in several of its portfolio companies. Helmer Stén, who was in many ways key to the creation of Industrivärden, died in summer 1950 and was succeeded by Sten Westerberg. The words written in memory of Helmer stated that: “he placed his sound judgment, extensive experience and unique ability to bring people together and inspire enthusiasm at the unlimited disposal of the company. The company owes a huge debt of gratitude to him.”

Handelsbanken still had large receivables from SCA, and followed the world market in wood and paper with interest. The US was the biggest exporter of these goods at the time. However, demand outstripped supply, with rising prices as a result. Encouraged by this development, Handelsbanken drove forward the initial public offering of SCA. Industrivärden then sold the subordinated debenture in Bolinder-Munktell to Handelsbanken, acquiring 10% of SCA’s stock instead. The company once known as Handion now had its "successor" as shareholder.

In the 1950s, Industrivärden, still with just one employee, was primarily focused on transactions in its existing portfolio companies. Stock dividends increased the holdings in Fagersta, Almedahl-Dalsjöfors and Bergvik och Ala. Exposure to Fagersta and SCA grew repeatedly, while it fell in the case of Ericsson. Ferdinand Wallberg became CEO in 1956, and Ernfrid Browaldh became the new Chairman.

Towards the end of the decade, entirely new holdings joined Industrivärden’s portfolio. In 1957, the company acquired shareholdings in AGA AB and Svenska Metallverken. The two companies had been part of Handelsbanken’s sphere of interest for a long time. In 1958, Industrivärden expanded in the textiles industry by acquiring stock in Borås Väveri. In 1959, it increased its investment in the construction industry through an issue for non-cash consideration in cement manufacturer Gullhögens Bruk. The Wingårdh family who owned Gullhögens thus became Industrivärden’s first major shareholder. 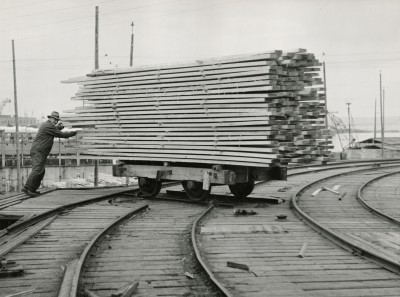