The 1940s: Industrivärden is founded with eight portfolio companies and listed on the stock exchange

In 1944, the investment company Industrivärden was created as a subsidiary of Handelsbanken. The name, which means “industrial values”, was chosen in honor of the highly valued holdings in industrial companies that were being transferred to the new company.

A statutory meeting was held on January 15, 1944, and the company was registered on February 21. Industrivärden was formed as a sound company with 2,500 preferred shares and 250,000 ordinary shares. Helmer Stén was Chairman and Sture Ödmark was CEO. The fundamental assets were holdings in eight companies at a book value of SEK 44 million: forestry company Bergvik och Ala, hydropower company Hammarforsen (both of which were hived off from SCA when the parent company was reconstructed), steel company Fagersta, Telefonaktiebolaget L M Ericsson, textiles company Almedahl-Dalsjöfors, textiles company Kilsund and portfolio management companies AB Hindus and AB Regia. A subordinated debenture for SEK 5 million in engineering company Bolinder-Munktell was also included.

The next year, Handelsbanken listed Industrivärden on the Stockholm Stock Exchange. The bank’s shareholders were offered the opportunity to subscribe for one ordinary share in Industrivärden for every four ordinary shares in the bank. In the first few years, the company had just one employee, its CEO, and ownership was exercised primarily by the directors. 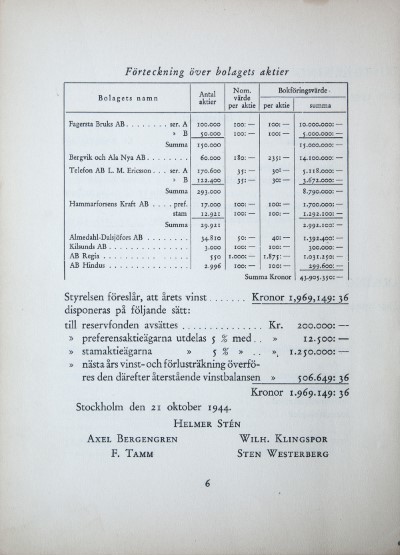